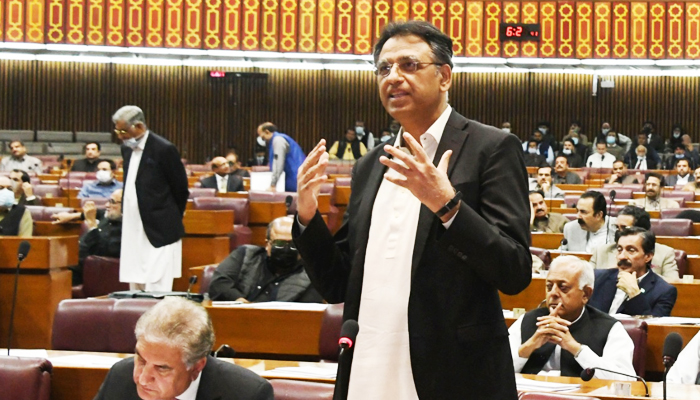 Federal Minister for Planning, Growth, and Particular Initiatives Asad Umar has issued a clarification concerning his assertion about “beating” the individuals of the lengthy march, Geo Information reported Monday.

Talking throughout at the moment’s session of the Nationwide Meeting, the minister mentioned that the federal government has nothing to fret about, including that the individuals of the match will “nonetheless be overwhelmed up [not physically] however they’d obtain political thrashing.”

“We need not resort to bodily beating; we’re neither afraid of the Opposition nor free media”.

It ought to be recalled that a number of days in the past, Umar had come below fireplace as he threatened to take care of the individuals of the Pakistan Democratic Motion’s lengthy march with an iron fist. On the time, Umar had used the Punjabi phrase “kutt” (thrashing) to take care of the marchers and had instructed them to not head in the direction of Islamabad.

Clarifying his earlier assertion, the minister mentioned that individuals accused him of issuing violent threats and urged a case ought to be registered in opposition to him.

“I had solely mentioned that there are some facilitators of the PDM working for media organisations, with out naming any specific journalist,” the minister mentioned.