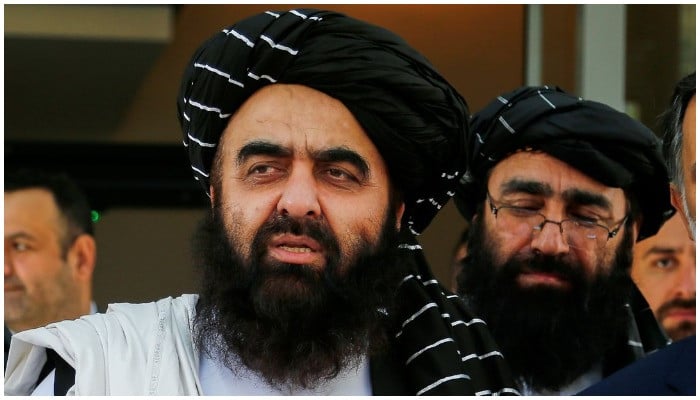 On Monday, Federal Minister for Information and Broadcasting Fawad Chaudhry announced that the government of Pakistan and the banned outfit have reached a “complete ceasefire” during peace talks.

Today, while addressing a seminar at Institute of Strategic Studies Islamabad during his visit to the federal capital, Muttaqi confirmed his role in mediating peace talks between both sides.

Muttaqi was specially invited by Pakistan to attend the ninth session of Troika Plus meeting held in Islamabad.

The acting Afghan foreign minister said that his country hopes there is further progress in the coming days in negotiations between the two sides.

Muttaqi claimed that Afghan soil is not being used against Pakistan.

“Currently, there are no anti-Pakistan elements present in Afghanistan,” he said.

The minister said that they “cannot figure out what to do in order to get recognition” for the Taliban regime from the US and the rest of the world.

He assured the participants of the seminar that women are back “100%” to work in the health sector and associated institutions, while 75% female employees have resumed work at educational institutes.

Speaking about the Afghan army, Muttaqi said Afghanistan “does not need” a big army.

“We will build a small but skilled army,” the minister said.

Taliban told to uphold international obligations at Troika Plus meeting

The Troika Plus on Afghanistan was attended by special representatives of Pakistan, China, Russia and the US. The meeting asked the caretaker Afghan government to take a friendly approach towards neighbouring countries.

During the meeting, the Taliban government in Afghanistan was given a clear message to uphold its international legal obligations, including universally accepted principles of international law and fundamental human rights.

Addressing the Taliban, it said that it had expectations that they would take decisive action against terrorists, fulfil their commitment to prevent use of Afghan territory against its neighbours, and other countries in the region and the rest of the world.

As foreign capitals had complained of trouble distributing humanitarian aid, the Troika called on the Taliban to ensure unhindered humanitarian access, including by women aid workers, for the delivery of humanitarian assistance in Afghanistan to respond to the developing crisis.

The Taliban were also asked to work with fellow Afghans to take steps to form an inclusive and representative government that respects the rights of all Afghans and provides equal rights to women and girls to participate in all aspects of Afghan society.

The Troika declared that they would continue to hold practical engagement with the Taliban to encourage the implementation of moderate and prudent policies that can help achieve a stable and prosperous Afghanistan as soon as possible.

Of particular importance was the Troika recalling the relevant Afghan-related UNSC Resolutions, including respect for the sovereignty, independence and territorial integrity of Afghanistan that is free of terrorism and drug related crime, and that contributes to regional stability and connectivity.