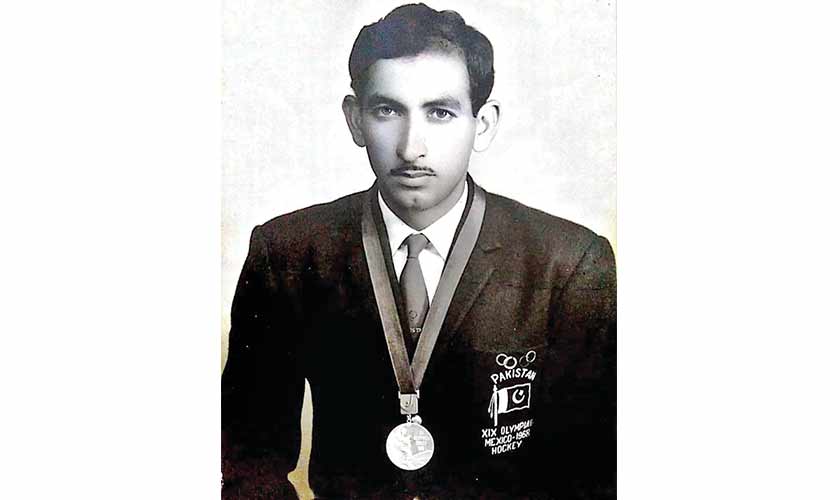 The second of Pakistan`s three Olympic gold medals (all in hockey) was won in 1968. In the last 16 months, four stars of that glorious campaign at Mexico City have left for their heavenly abode.They were Vice-Captain Asad Malik, scorer of the gold medal-winning goal in the 2-1 victory over Australia in the final (July 2020), that cracker of a centre-forward Abdul Rasheed Jr, joint top scorer of the Olympics (November 2020), Pakistan`s finest all-rounder Jahangir Butt, who played at left out in 1968 (September 2021) and left half Gulraiz Akhtar, who blunted numerous attacks of the opposition (October 31, 2021).

Gulraiz was born in 1940 in Rawalpindi, a big hockey nursery of the time which provided several players to the national teams of the 1950s, 60s, and 70s.

Then his father`s younger brother Naseeb was a member of the Pakistan team which won the country`s first-ever Olympic medal (silver) in 1956.

After his playing days, Naseeb took to coaching and held regular training camps in Rawalpindi. Gulraiz`s first coach was his uncle. Meanwhile, his elder brother Pervaiz had appeared for Pakistan. Gulraiz made rapid strides. He earned selection in the team of Rawalpindi`s famous Gordon College and also appeared for the Army`s 501 workshop in domestic tournaments.

A good show for the 501 workshop propelled him to the selection for the Army team for whom he appeared in his first national championships in 1963.

In 1966, he joined the strong Customs side. The same year Gulraiz earned his first international cap, at the Hamburg International Festival.

Next, he played in the test matches against visiting sides but was overlooked for big events, including the 1966 Asian Games.

Tournament selection came at the Pre-Olympic Festival in Lahore in January 1968. Legendary Habib Kiddie had manned the left half spot for Pakistan virtually unchallenged from 1950-1964; including four Olympics. After Kiddie`s departure, Fazalur Rahman occupied the position.

In the sub-continental style, the left half was regarded as a defensive midfielder who sometimes even covered the goalkeeper and was supposed to make the first time clearance; Kiddie epitomised it. But his successor Fazalur Rahman was unique who often went up with the ball in the role of a forward. He possessed great ball control.

Gulraiz largely remained Fazal`s reserve in the early part of his international career. For the 1968 Olympics, Pakistan manager Brig Atif took some bold decisions. Right side attacks were considered more dangerous as the opponents had to stop them mainly from their left or weaker side.

Fazal was very popular with the crowds for his aggressive instincts. But he sometimes over-dribbled to the very edge of danger. That proved costly at times. Pakistan lost the 1966 Asian Games final to India 0-1. Many blamed him for the goal scored by Balbir Singh. Gulraiz was a left half in the Habib Kiddie mould. He believed in first-time clearance; not travelling with the ball. Atif wanted to blunt opponents` attacks from the right side. Fazalur Rahman was the left half in the World XI of many. Yet, at the Mexico Olympics, Gulraiz was preferred throughout with Fazal on the bench. He was also the choice of Tariq Aziz, Pakistan`s 1968 captain, who said: “I was the left full-back. With Gulraiz as the left half, my confidence always soared. We covered each other well, making it difficult for the opposing forwards. He was a brilliant tackler and also intercepted opponents` passes well.”

Pakistan won the gold at Mexico in style, winning all their nine matches, and Gulraiz was a pillar of strength in defence. Next year, Pakistan hosted a high-profile international tournament in Lahore where almost all the top-ranking national teams participated. Pakistan entered two sides. Again, Atif selected Gulraiz in the senior team while Fazal was in the junior squad. Remarkably, the final was played between the two Pakistani sides.

Gulraiz was also a member of the 1970 Asian Games gold medallist team. Here, Fazal was the first choice of new manager Brigadier Hameedi. It also turned out to be his last international appearance for quite some time

At the 1972 Olympics, Pakistan lost the final against erstwhile West Germany. The players were unhappy with the umpiring and misbehaved at the medal ceremony. FIH banned Pakistan from all the international competitions for four years. Later, it was decided that the ban would apply to only 13 players and the team officials. Again, it was relaxed, reduced to one year. Due to the non-availability of those players, the Pakistan team at the 1973 World Cup included several newcomers along with some recalled veterans including Gulraiz. The newly assembled Pakistan team performed beyond expectations. They topped the pool and went down fighting to India 0-1 in the semifinal; lost the 3rd position playoff against West Germany with the same score.

All these years, Gulraiz played for Customs in the domestic circuit. Customs won their maiden national title in 1969 and went on to win the next two editions as well. They were the first side to complete a hat-trick of national championships. And Gulraiz played a vital role in those successes.

The Rawalpindi boy had moved to Karachi on joining Customs. Later, he was transferred to Lahore by the department where he breathed his last. He retired in 2000 with the rank of Assistant Collector.

Gulraiz was well respected among his contemporaries. He was never involved in any controversy. He was a sophisticated man with a good sense of humour who often discussed tactics with his teammates.

The scribe often approached him for information for hockey articles and he always obliged.

Former international Major Peerzada has been organising meetings with hockey stalwarts in Lahore quite regularly. This June, it was “Meet Gulraiz Akhtar”. Despite his failing health, Gulraiz was there at the lively evening where the guests included his 1968 Olympics captain Dr Tariq Aziz and another member of that side Anwar Shah.

Whenever there is a talk around Pakistan`s greatest left halves, Gulraiz Akhtar`s name will be there.