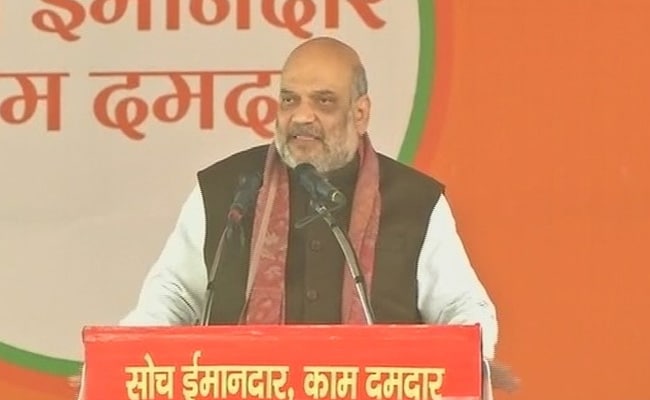 Amit Shah – in Uttar Pradesh’s Azamgarh on Saturday to lay the foundation stone for a university – took a flurry of swipes at Samajwadi Party boss Akhilesh Yadav and praised Chief Minister Yogi Adityanath.

Mr Shah’s rally and comments were significant given UP votes in a few months.

A BJP leader has never won the Azamgarh Assembly seat, making this a huge prestige battle.

Among the significant comments were the promise of ‘jam’ for the people of UP (that segued into a jibe at Mr Yadav) and a commitment to Adityanath as the party’s chief ministerial candidate.

“Modiji has a JAM idea for India and UP…” Amit Shah said proudly, adding,”… Jan Dhan bank accounts, Aadhaar cards and mobile phones for everyone. When I said this in Gujarat, the Samajwadi Party said they had a ‘jam’ idea too. I asked a journalist what this was… he said it meant ‘Jinnah, Azam Khan and Mukhtar (Ansari, the gangster-turned-jailed politician).”

“Now you tell me… do you want our ‘jam’ or the Samajwadi Party’s?” the union minister asked.

“As the election approaches, Akhilesh has started seeing greatness in Jinnah. There are minorities sitting here… does anyone feel Jinnah is great? No one… it is only Akhilesh who feels this,” he said.

With just months left before UP votes for a new government, the BJP (and others, including AIMIM chief Asaduddin Owaisi) gleefully jumped on the remark and roasting the Samajwadi Party chief.

Adityanath led the attack, calling Akhilesh Yadav a man with a “Talibani mentality”.

“His divisive mindset came to the fore again… It is the Talibani mentality that believes in dividing,” the Chief Minister declared as he demanded an apology from Akhilesh Yadav.

The critics also included BSP chief Mayawati, who claimed the BJP and the Samajwadi Party were working together to poison voters’ minds and polarise them before the election.

Mr Yadav has dismissed criticism and asked those attacking him to read history textbooks instead.

The BJP has always targeted the Samajwadi Party – which has support among the Muslims – of appeasement; at one point Mr Yadav’s father, Mulayam Singh, was dubbed “Maulana Mulayam”.

Also today, apart from offering UP ‘jam’, Mr Shah also underlined the BJP’s support of Adityanath as the party’s chief ministerial face – important given the intense buzz surrounding his future after senior party leaders, including a Union Minister, criticised his handling of the Covid pandemic.

The call for votes included a subtle note of impatience at poll results.

“I said earlier we never get adequate seats in Azamgarh… but ‘ab bahut ho gaya‘. I am asking you to give all seats to the BJP so Yogi Adityanath can be Chief Minister again,” Amit Shah declared. 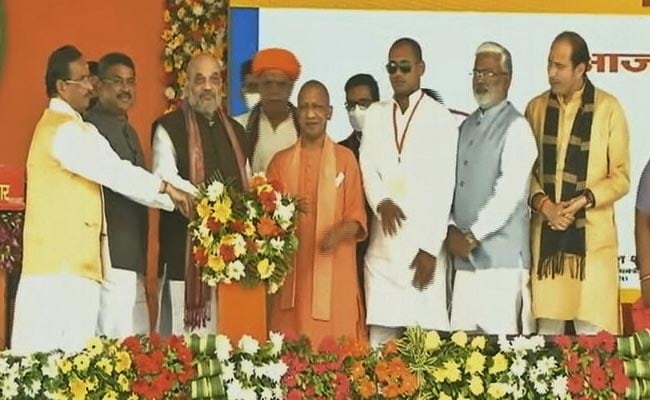 This isn’t the first time Amit Shah has praised Adityanath; last month he called for votes for the Chief Minister and, crucially, linked those votes to the BJP’s 2024 election campaign, when PM Modi is widely expected to run for an unprecedented third consecutive term.

Meanwhile, Akhilesh Yadav wasn’t quiet today either, responding to the BJP on his turf by campaigning in Adityanath’s backyard of Gorakhpur.

“There will and has to be change. The public is disappointed in the Yogi government – their promises are false. They said inflation will be reduced… but prices have increased. Look at fuel prices,” he said as he held a 60 km rally from Gorakhpur to neighbouring Kushinagar.

Mr Yadav spoke to NDTV this week and gave a glimpse of his plan to defeat the BJP – a pincer movement of regional parties in the eastern part of the state and angry farmers in the west.

How effective this will be can only be decided when UP votes next year.